Shattered Lives – In the Pearl of Africa 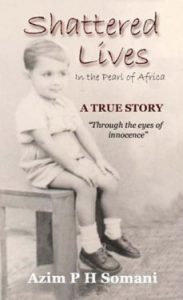 hattered Lives – In the Pearl of Africa

‘Shattered Lives – In the Pearl of Africa’, is an absolutely unique document based on a true story that takes the reader through a journey of sorrow, humour, enjoyment, excitement and fun. Here, one man walks his memory lane and gives an account of how he was left in boarding school at the mere age of nine and how he coped with his emotions and feelings.

At the age of fourteen, he rescued a family with five children under the age of seven fleeing from Zaire’s civil war in 1969. He talks about the 1971 military coup in Uganda and how he with his colleagues escaped at night from the war in 1972 and how they were almost killed by the Ugandan Army.

He also talks about the events on the Wolfrom Mine near the gorilla forest on the border of Zaire and Rwanda and as if this was not enough, he walks his memory lane taking account of life under the ninety days deadline imposed by Idi Amin and tells how fear, death and destruction destroyed entire communities and Shattered Lives.

‘Its the book that says it all’ The Indian Magazine

‘A most engrossing read’ Daily Mirror

‘An Emotional Journey’ The Conservatory Warehouse

‘A gripping story of boy to man and his amazing experiences. Once you start reading this book, like me, you will not stop!’ Sport Nottingham